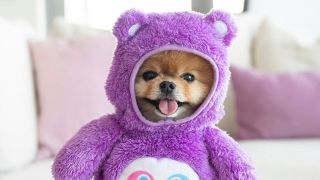 Move over kitty cats because these Instagram dog accounts are proving that their days of feline fur baby domination are coming to an end.¬Ý

From a former street dog and traveling besties to a pint-sized rehabilitation warrior who‚Äôs bringing smiles to the faces of seriously ill children, our favorite Instagram dog accounts will brighten your day, fill you with wanderlust and make you laugh out loud.¬Ý

This precious pomeranian was rescued just before being sold to a meat market in China and brought to live in Los Angeles by his new pet parents. Famous for his high-fiving paws, Chewie is a super chill and friendly dog who loves kids but has zero time for other dogs. With his cute outfits and big smile, this little dude is taking the world by storm, one paw at a time.¬Ý

Abandoned by his original owner, Tuna is a chihuahua dachshund cross with an exaggerated overbite, recessed jaw and shrivelled neck that have won him hearts the world over.¬Ý

Promoting animal welfare and to never judge a book by its cover, Tuna is teaching the social media generation the true meaning of love. When this introverted guy isn‚Äôt burrowed under the covers at home, he travels the world reviewing pet hotels and counts Lady Gaga among his many fans.

She may be small but this 4-year-old long-haired dachshund is all sass when at home with her pawrents in West Virginia. This little cutie‚Äôs Instagram feed is full of pastel-colored pics of her and her brother, fellow dachshund Winston, and the whimsical and playful feel of her page is bound to spark joy in your soul. A total daddy‚Äôs girl, Maya loves giant bows, everything pink and promoting her new luxe dog apparel and accessory line.

Winner of the 2019 People‚Äôs Choice Award for Animal Star and rocking his very own line of face masks, this pug is doing his part to keep people safe and smiling. Rubbing paws with celebrities and making appearances in music videos are all part of this colorful character‚Äôs day job and his friendly, laid-back vibe, funky clothing choices and signature ‘sun‚Äôs out, tongue‚Äôs out‚Äô photo pose has earned him a cult of 4 million fans on the Gram.

BFF‚Äôs Parson Russell Terrier Chloe and Daschund Django are on a mission to see the world together. When they‚Äôre not living it up in their home city of Rio de Janeiro, they‚Äôre soaking up the sun and the sights everywhere from California to Lisbon. This adorable doggie duo loves playing fetch on Rio‚Äôs white sandy beaches and splashing in the crystal clear water but most of all they love each other and haven‚Äôt spent a day apart since they were united 8 years ago.

Meet Norbert, the teeny-tiny Chihuahua, Cairn Terrier and Lhasa Apso mix who‚Äôs bringing joy to the kids at the Los Angeles Children‚Äôs Hospital as a registered therapy dog. Norbert‚Äôs life mission is to make others smile and to remind us all that no matter how small we are, we can still live a life of big dreams. He‚Äôs the face of the kindhearted project Norbethood for Good, which makes cuddly and huggable plush toys in his image that are donated to charities supporting children in need. When he‚Äôs not busy bringing magic to little lives, Norbert loves hanging out at home with his brother Fred.

Based in Helsinki, we can‚Äôt get enough of Yoda, the adorable Jack Russell Terrier. This photogenic sweetie will melt your heart with her beautiful big eyes and free spirit. A lover of all things snow and ice, Yoda has traveled to the Arctic Circle and Lapland, rocking some seriously cute and cozy jumpers along the way. But it‚Äôs not all winter wonderland adventures for this girl who makes sure she gets her fill of summer sunshine too, kayaking around the islands of the Helsinki Archipelago, swimming in Slovenia and eating ice-cream in Italy.¬Ý

A post shared by Kiba the Australian Shepherd (@aussiekiba)

This stunning feed features gorgeous images of Kiba, the red tri miniature Australian Shepherd, immersed in nature. Based in Seattle, Kiba and his pet parent H‚ÄôLiana love exploring the Pacific Northwest and roaming the planet together, capturing the wild and rugged beauty of the natural world. Kiba loves camping, playing in the snow, exploring the Oregon coastline and occasionally howling for the camera.

With over 10 million followers on the Gram and raking in close to 6 million dollars a year, this poofy pomeranian is giving human celebrities a serious run for their money. Made famous thanks to his appearance in one of Katy Perry‚Äôs music videos, bear-faced Jiff is also a Guinness World Record holder for the fastest 10m run on hind legs and the fastest 5m run on front paws. With his own hashtag and line of merchandise, it‚Äôs clear that this cute social media sensation is here to stay.

Found close to death on the streets of Kerala in India at just 3 weeks old, Chapati was rescued by Ukrainian couple Eugene and Kristina and she‚Äôs been traveling the world with them ever since. From India and Thailand to Kosovo and Montenegro, Chapati‚Äôs biggest wish is that all dogs are loved, cared for and treated properly and she wants everyone to know just how cool and smart ex-street dogs can be. So far, she‚Äôs visited more than 30 countries around the world and this active adventurer shows no signs of slowing down any time soon.