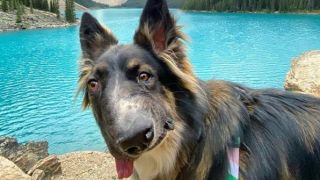 MEET the brave dog who has become a social media star! Brodie - the ‘Picasso masterpiece’ dog - is a one-year-old German Shepherd / Border Collie cross who now lives with cranial deformities after being attacked by his mother as a puppy. His new pet-parents, Amanda Richter, 30 and Brad Ames, 23, of Alberta, Canada, saw Old Macdonald Kennels’ Facebook post asking for applications to adopt him and, after deciding to visit, instantly fell in love.

Amanda told Beastly: “I literally looked at the picture and would cry and just be like, we have to go meet this dog.” Brad was very much in agreement, “I spent an hour with him and I had to take him home.”

Brodie is a special needs dog because he requires a little bit of help with things. He is blind in one eye so he requires eye drops every day and, due to his fused jaw, cannot eat like other dogs. However, while he looks different, his owners say he behaves like any other dog and doesn’t let his disability slow him down in any way. Brodie has even become a bit of a social media sensation after Amanda set up an Instagram account for him - @bestboybrodie - so that people could keep up to date with his story, he now has an amazing 150,000 followers.

Amanda and Brad hope that after a bit of training, Brodie will become a therapy dog. “We'd like to take him maybe into old folks homes,” said Amanda. “Perhaps children's hospitals and group homes for people that have disabilities, that kind of thing.”

We certainly think he’s a masterpiece, watch his video and see if you agree…