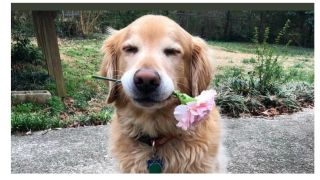 Since losing Charlie the golden retriever to lymphoma earlier this month, Sallie Hammett, from Greenville, South Carolina, decided to celebrate his memory with a loving tribute.

Her obituary, posted on her Twitter page (@SallieGHammett) on September 23, went viral and has been liked over 110,000 times, retweeted over 10K times, and has more than 3K comments from people sharing condolences and pet photos.

I wrote my dog an obituary because of course I did. He was the best boy. pic.twitter.com/FKmqeivtq9September 22, 2020

“I wanted to get down all of his quirks,” she told TODAY.com. “Not that I think I’ll ever forget them, but I wanted to immortalize them and write down every little thing, like him hating stairs and loving peanut butter and all that stuff. I wanted him to be recognized for how important he was to me.”

The online response has really helped Sallie with her grief.

“It’s been a distraction because I have a new dog picture to look at every two minutes, which was an unrealized dream of mine,” she said.

“It’s been so overwhelming but heart-warming, too, because it’s made me feel like my grief is shared, and it’s just so cool that so many people are getting to know Charlie.”