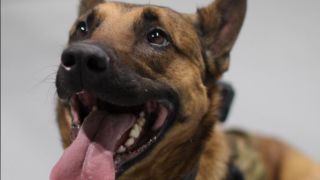 Tyler Falconer, 27, from Boston, set up the Falco K9 dog training school four years ago after leaving military service with the Navy. Tyler uses his military experience to train dogs in everything from basic obedience to police work and personal protection, starting from when they’re puppies through to deployment on the streets.

Tyler, who is also a firefighter, told Barcroft Studios: “I apply my military background to Falco K9. In a sense my criteria is a little bit higher than your average company. It's not just a job to me because I know the ramifications if not done properly. We train so there's not any failed deployments out there on the street, whether it be a personal protection dog or a police dog.”

Nala, a four-year old Belgian Malinois, is Tyler’s own dog and one of the best he has ever trained or owned. You can see them both in action in this video, practising scenarios including car jackings and muggings, where Tyler wears a decoy suit. “The feeling inside the suit, it's amazing, you feel like you're really connecting with the dog on that level.”