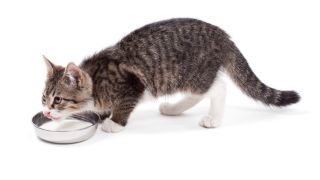 Some foods are poisonous to cats, but it’s not immediately obvious what the main culprits are. We all know people who dote on their pampered felines, allowing them to sample all manner of human treats. Maybe you’ve done it yourself. We’re not judging anyone.

For all your good intentions, however, you won’t be doing your cats any favors. Cats’ digestive systems are much more sensitive than those of their owners. In the long term, it could cause problems with internal organs. In the worst cases, it can even cause death. To be on the safe side, stick to cat treats and cat food. We've advice on all types in our guides to the best wet cat food, the best dry cat foods and the best cat food overall.

With this in mind, then, here are five foods that you should really look to keep away from your cat’s plate…

1. Milk: The cat who got the cream won’t be so smug for long

The image of a satisfied cat lapping up a saucer of milk is an enduring one, but what’s depicted rather less in story books is the often rather less appetizing aftermath. Stomach problems, such as diarrhea, are a common result of cats consuming dairy products due to their lactose intolerance, so while they might enjoy a bowl of the white stuff, it's best to avoid giving them some. Even at birth, kittens seldom drink their mother’s milk for more than a couple of weeks, so reintroducing them to lactose isn’t the best idea.

2. Chocolate: A treat for humans, but potentially a tragedy for felines

Tempted to share a bit of cake or ice cream with your furry friend? Don’t. Chocolate contains a component called theobromine that is toxic to cats (dark chocolate is especially bad, since it contains a higher percentage).

Potential symptoms include heightened thirst, vomiting, diarrhea, lethargy and muscle tremors. Longer term (24-72 hours after ingestion), hyperthermia and/or pancreatitis may result. So even if they seem really eager (cats like the taste of chocolate), resist your cat’s charms. You won’t be doing them any favors.

3. Alcohol: Yep, sadly we do have to say this

We’re going to assume that any ingestion of alcohol on the part of your pet is all a big accident. Don’t be the other kind of person. For many of you, the effects of alcohol on humans are obvious. For cats, whose bodies are less equipped to process alcohol than our own, the effect is even more pronounced. As well as the obvious (lethargy, labored breathing, impacted coordination), there is the potential for falls in body temperature and blood sugar levels, as well as damage to the kidney and liver.

4. Onions: The root of (some) problems for cats

Leaving out scraps of unfinished dinner for your cats isn’t a great idea at the best of times – and it’s even worse if these leftovers happen to contain onion remnants. Also found in some types of baby foods, onions (and most root veg, in fact) attack the red blood cells, breaking them down and causing anaemia and lethargy. These in turn can potentially prove to be fatal symptoms. It’s best to steer clear of these particular roots, then.

5. Coffee: Vital for humans, not so much for cats

We may rely on caffeine to power us through the day, but cats can most definitely do without it. Thanks to the presence of methylxanthines (which also makes chocolate a no-go area), coffee should be kept away from cats. Small amounts shouldn’t cause serious harm, but larger quantities (found in tea bags and coffee beans) could result in some side effects. These include hyperactivity, vomiting, tremors, and seizures, as well as elevated rates of blood pressure, temperature and heart rhythm.

If in doubt, call the vet

To state the obvious, we strongly recommend not feeding your cat the above foods. Dispose of any leftover meals, or keep them out of paw’s reach. If you are worried your cat has consumed any of these foods, or is displaying any of the aforementioned symptoms then please call your local vet immediately.