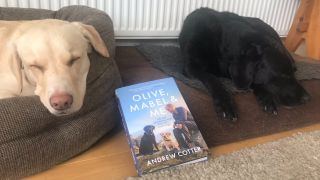 A sports pundit put his commentating skills to good use during lockdown to make funny videos of his two Labradors, Olive and Mabel – and they’ve been watched over 50 million times.

Andrew Cotter’s Twitter page (@mrandrewcotter) went viral after he started chronicling the mundane lives of his two dogs during lockdown earlier this year.

Like many people around the world, when COVID-19 hit, Cotter’s work as a television sports commentator dried up. To pass the time, he put his observation skills into practice and started making funny dog videos of Olive and Mabel.

Using this time to get a few things done at home. pic.twitter.com/6k8wrgxUfLOctober 7, 2020

He told PA News: “I eventually decided to commentate on the dogs. I was fortunate that it was the dogs because then that took off with a lot of people and resonated with them as dog owners.”

Six months later, Cotter’s videos of Olive and Mabel have been seen by millions of people around the globe and he is now a published author.

His book, Olive, Mabel And Me: Life And Adventures With My Canine Companions, is out later this month.