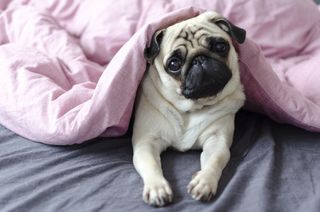 Learning how to make puppies sleep can maximize your rest during those early weeks and months, although sleepless nights may seem like an inevitable component of new puppy ownership. Puppies are constantly learning from our cues, so it’s up to you to ensure that your puppy learns to sleep well, instead of learning to wake you up repeatedly throughout the night! Successfully teaching your puppy to sleep through the night requires careful attention to your actions not only at bedtime and during the overnight hours, but also throughout the waking hours of the day.

1. Give your puppy a lot of exercise, especially in the evenings

Maximizing your puppy’s play and activity will increase the likelihood that your puppy sleeps well at night. Long walks, extended play sessions, and other stimulation will burn off some of your puppy’s excess energy and prepare them for a good night’s sleep.

Ideally, your puppy should be active throughout much of the day (except when they’re taking much-needed naps). However, it’s helpful to pay special attention to your puppy’s activity level in the hours immediately before bed. If you tire your puppy out early in the morning, they have all day to recharge with naps. If you tire them out in the evening, they’re more likely to be exhausted at bedtime and sleep through the night. You’ll find lots of ideas for keeping them entertained (and exhausted!) in our guide to the best puppy toys.

2. Give your puppy a dedicated quiet location for sleeping

While it may be tempting to allow your puppy to sleep in your bed, this habit can be difficult to break! Instead, work on setting up a safe sleeping space for your puppy. Over time, your puppy will learn to associate this location with sleep, just like we humans associate our bed and bedroom with sleeping.

In most cases, a crate is an ideal location for sleeping. The crate can also help with housebreaking, as most puppies are reluctant to urinate or defecate in the same location where they sleep. In order to be helpful for housebreaking, the crate needs to be the right size: just big enough for your puppy to stand, turn around, and lay down comfortably. If you use a large crate, your puppy may learn to regard one part of the crate as the “bathroom” and one part of the crate as the “bedroom,” which can encourage accidents. Keeping the crate small will discourage your puppy from eliminating in the crate.

Once you’ve purchased an appropriately sized crate, add a soft bed. Remember that puppies can be destructive; look for bedding that cannot be easily chewed up or destroyed.

3. Help your puppy develop a positive association with the crate or other sleeping location

When bedtime rolls around and you’re tired, it can be tempting to chase your puppy around until you can catch them and toss them unceremoniously in their crate. Unfortunately, this can have negative effects! If this becomes your daily bedtime routine, your puppy will quickly learn to resent bedtime and may be less willing to enter the crate or go to sleep.

Avoid using your puppy’s crate as a punishment. While there may be times that you need to confine your puppy for safety, using a crate as punishment or when you are angry may make them reluctant to go into their crate at bedtime.

Always take your puppy outside as the last step in your bedtime routine. Ensuring that your puppy goes to bed with an empty bladder will further decrease the likelihood of overnight trips outside and overnight accidents.

It’s human nature. When a puppy begins whining during the night, we’re all tempted to go to the crate and check on the puppy, to whisper “hush,” or to respond in some other way. We may even put a leash on the puppy and go outside, to be sure that our puppy doesn’t need to go to the bathroom. Unfortunately, by doing so, we’re training our puppy to whine in the middle of the night to wake us!

Until your puppy reaches roughly four months of age, it’s normal to expect that they may need to go outside to eliminate at some point during the night. Consider setting an alarm for the middle of the night (or 30 minutes before your puppy’s normal wake-up time) to take your puppy outside, instead of waiting to be woken up by whining and fussing. While this may seem like overkill, it minimizes the likelihood that your puppy will whine for your attention during the night. As time goes by, you can gradually push this middle of the night wake-up alarm later and later, until you eventually eliminate it completely.