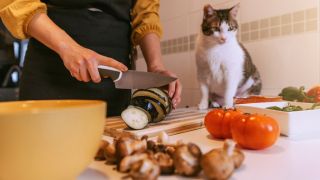 “What human food can cats eat? Can my cat share this with me?” is something you might have wondered when you were, say, chopping up a carrot. You’re not alone! Although cats are generally fussier than dogs - and a lot less likely to pester for table scraps - feeding them human foods can be rewarding for you both. Sharing your food with your cats is a great way to increase your bond with them, as well as add valuable nutrients to their diet. But before we tell you which foods are safe to share, we’re going to go over some ground rules.

How much should you feed your cat?

Did you know that around 1 in 3 cats in the US are overweight or obese? Obesity is a growing issue amongst pets, and overfeeding is the major cause. Whilst it is fun to share human food with your cat, you should remember that they are tiny compared to us, and they need far fewer calories. The average cat needs just 200 calories a day. And to avoid unbalancing their diet, you shouldn’t feed any more than 10% of their calories as treats. This means 180 calories from complete and balanced cat food, and 20 calories for everything else. Human food, cat treats, cat milk and even medications can add to your cat’s calorie allowance, so be calorie wise when you’re giving human food to your cat!

Feeding a new food for the first time

We’re going to give you a few foods you can try sharing with your cat, but it’s important to remember that every cat is different. It’s possible for your cat to have allergies, so always feed a very tiny amount of a new food at first, then observe them for a couple of days. If they seem well, stools are normal, and they’re behaving normally, it should be safe to feed them it more often. If you notice anything out of the ordinary, it’s a good idea to stop feeding your pet the food.

Human foods that are safe for cats to eat

So, without further ado, our vet-approved list of human foods that cats can eat. Remember to follow the golden rules above if trying any of these, and don’t force your cat to try anything they don’t want to!

As a major ingredient in cat foods, it should come as no surprise that cats can eat chicken. Skinless, boneless, free-range chicken is a good source of lean protein and other nutrients for your cat. It also has a high water content, which cats require. Whilst raw feeding is very popular, chicken is a high-risk meat when it comes to salmonella and other food-borne diseases that your cat can pass on to you - boiling it is much safer. Watch out though - half a chicken breast contains about 200 calories and just 10 grams has used up your cat’s entire treat allowance for the day!

Prawns are small and perfectly portioned for cats. They contain large amounts of vitamins E and B12, as well as omega-3 fatty acids and some more unusual vitamins, including zinc and selenium, making them great for senior cats struggling with brain function or joint disease. The great news is that one small prawn contains 5-7 calories, meaning your cat can have this as a healthy snack and still have room for some bedtime treats!

Tuna makes a great snack for cats that are fussy and need some encouragement to eat. Whilst your cat wouldn’t turn down a tuna steak, tinned is also much-loved by felines. However, you should never feed tuna in brine, as the salt content is too high. Tuna in oil can be too fatty - the spring water type is best for cats. Just like prawns, tuna is high in omega-3, selenium and vitamin B12, making it especially good for older cats. Remember to scale down your portions to cat-sized: 0.5 ounces contains 15 calories.

Despite widespread rumours that avocado is poisonous, I can confirm that avocado is not toxic to cats. Persin, the toxin in avocado, doesn’t affect dogs or cats, although it is poisonous to many other species. Avocados are sometimes considered healthy, because they’re high in fiber and contain many vitamins and minerals, but it’s important to remember that they’re high in fat. Whilst it’s a ‘healthy’ fat, they still pile on the calories. Indeed, 1/8 of an avocado still contains too many calories for a cat - we suggest a teaspoonful at the most.

Pumpkin is safe for cats to eat, although they may not like it. It’s better accepted if it’s been cooked and cooled. Canned pumpkin is also safe, as long as it isn’t pie filling with additives - pure pumpkin is best. Pumpkin is high in fiber and is often recommended as a cure for diarrhea. Watch out though, pumpkin is high in sugar and can contribute to obesity and diabetes in cats. A quarter-cup is more than enough, and if you find you need to give it regularly for soft stools, a check up at the vet and a change in diet might be a better idea.

Eggs are another food you can occasionally give to cats, but only if you feed them cooked eggs. Raw eggs not only increase the risk of your cat getting salmonella, but the egg white can reduce vitamin uptake. Cats often like egg, as they’re tasty and high in protein and fat. Unfortunately, eggs are also fairly high in calories, so should be given only occasionally. One large hard-boiled egg contains 74 calories, so even a quarter of an egg is a very large amount for a cat to eat. Giving it as an occasional treat is sensible!

Which human foods are toxic to cats?

Of course, just as with dogs, there are lots of human foods that are toxic to cats. Cats are less likely to get into things they shouldn’t, so you may have heard less about some of these. Chocolate is toxic to cats - it causes increased heart rate, vomiting and diarrhea. Coffee and other caffeine-containing products are similar and can become fatal. Onions and garlic are also more toxic to cats than to dogs - causing severe anemia.

Cheese, milk, yoghurt and dairy products are not toxic to cats, but they’re not good for them, either. Cats aren’t able to digest lactose as efficiently as humans, meaning that lactose in their food can cause diarrhea and excess gas. However, very small amounts, very occasionally, may be safe for some cats. It’s also fattening, so take care - 10g of cheddar is most of your cat’s daily treat allowance. There's more info in our article, five human foods that are poisonous to cats.

Although not strictly toxic, you should also take care not to feed your cat dog food. Whilst they will survive on dog food for a short while, it doesn’t contain everything your cat needs to grow and thrive.

The great news is that many human foods are safe for cats to eat. Remember to only feed things that you know are safe, and start in small quantities to check that your cat isn’t allergic. And take note that cats are 10-20 times smaller than humans - so keep those ‘treat’ calories at no more than 20 per day!