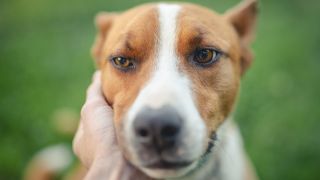 Most dog owners would assume their pets are extra happy to see their faces, but it turns out they’re just as excited by the back of our heads as the front!

Despite giving us the puppy dog eyes that tug on our heartstrings, a new study has discovered that, unlike us, dogs’ brains are not hardwired to respond to human faces.

However, they have learnt to use sound and scent to recognize their owners.

While humans use faces as a visual communication, dogs do not, according to the new study by Eötvös Loránd University in Hungary.

Using an MRI scanner, the team monitored brain activity in both people and dogs as they watched two-second videos showing human faces and backs of heads.

The results from the animals revealed that their doggy brains responded the same when they saw the back or front of a head, but in humans the visual cortex lit up when it saw a face.

“It’s amazing dogs do so well when it comes to reading emotions and identify from faces, despite the fact that they seem not to have a brain designed for having a focus on (them),” said Dr Attila Andics, co-author of the study.