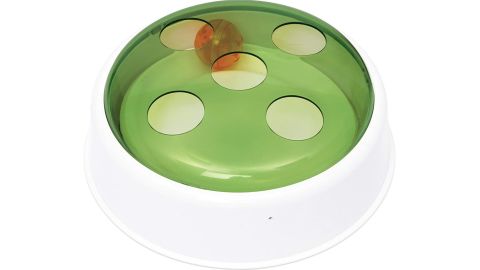 If you want to head out knowing that your cats won’t be bored, then this is one of the answers. Safe and encouraging of interactive play, this is what you need.

The Catit Senses 2.0 Ball Dome has been designed with two factors in mind: to help encourage and develop your cat’s hunting instincts, and to provide them with something to play with solo. Considering the former is important in maintaining their cognitive functions, and the latter means you can leave the house without worrying about them taking out their boredom on your armchair or carpet, we’d consider these to both be admirable aims. Essentially it consists of a plastic container with a ball, for which your cat can reach inside to bat it around. To find out more, read on…

As we’ve mentioned, the primary method of play for this is via your cat reaching inside the generously proportioned holes at the top of the dome, allowing them to bat around the ball inside.

While it doesn’t necessarily need buttons to operate it, we recommend you do so, as with them present, the more fun aspects of the Catit Senses 2.0 Ball Dome come into play. When batteries are included, it turns on a motion sensor that comes into play when your cat walks nearby. This in turn causes the plate within the dome to revolve, making the ball move and (hopefully) gaining your cat’s attention.

From here, your cat can play until their heart’s content. They prefer moving targets, as you will no doubt realise, and will get hours of fun out of it. When they get bored, the device will automatically power down after a period of inactivity. A few hours later, when they walk past it the same thing happens, and the fun will start all over again. Plenty of engagement is to be had for all with this interactive cat toy, and it doesn’t even take up too much space.

As well as being a great product on its own basis, Catit products are designed with a similar-looking aesthetic, allowing them to slot together and over time form their own cat theme park of sorts. We particularly recommend the Catit Play Treat Puzzle to go with it, so they can eat (slowly) after a workout.

It’s perfectly fine to just go with the Cat Dome though. Easy to set up and perfectly safe, it’s ideal for your stay-at-home cat.

When tested out on this writer’s own two moggies, we can report that it works just as well as the manufacturer claims. Well, almost.

The initial burst of activity from the Dome upon one of them encroaching on its territory definitely came as a surprise to the cat in question. Once he overcame his natural suspicion, however, and gave it a go, then all bets were off. He would not be distracted, and had a whale of a time. His twin sister had a similar amount of fun.

Even when I haven’t changed the batteries, that hasn’t put them off from playing with it. Sure, with the automated interactivity taken out of the equation they naturally use it less - as evidenced by me occasionally having to put the ball back in the dome.

This, really, is the only issue I’ve found with it. It’s not the heaviest, and while my girl cat is capable of using it without knocking it over, I can’t say the same for her (physically) bigger brother. I can’t say for certain which one managed to get the ball out of the dome, but considering they both have a habit of improbable Houdini acts (he regularly finds himself on high surfaces that he definitely can’t climb high enough to reach, and she once found her way out of a supposedly escape-proof bodysuit), I’ll hedge my bets.

It’s not that much of an issue though, as the ball is perfectly harmless. It’s advertised as BPA-free, as well as being paw friendly, so from a safety standpoint there’s nothing to worry about.

Should you buy the Catit Senses 2.0 Cat Dome?

If you would like to leave the house knowing that your cat won’t be bored, or want to encourage their natural behaviour, then this is definitely something you should consider buying. It’s perfectly safe, doesn’t take up too much space, won’t break the bank, and definitely can’t be accused of misleading advertising. By now we’ve learned to have a lot of confidence in Catit’s products, and it’s great to have this validated. Sure, they’ll likely get bored of it after a while, but this hasn’t happened to ours yet, leaving us satisfied that for the price, its likely lifespan will make it worth your while.