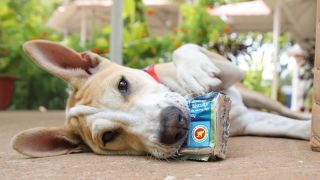 A rescue dog called Foxtrot has accepted the Nobel Peace Prize on behalf of the World Food Program, and it has caused a storm of excitement on Instagram. Yes, his human masters had their own things to say, but as official spokesdog for the organization, Foxtrot has taken it on himself to express his thanks.

The Norwegian Nobel Committee stated, "The World Food Programme has made a strong contribution towards mobilizing UN Member States to combat the use of hunger as a weapon of war and conflict." And Foxtrot was quick to agree.

On hearing the news, the official mascot was as excited as his human friends at the organization, saying, "Woweee, I was so excited to hear that the @worldfoodprogramme was awarded the Nobel Peace Prize today," on his own personal Instagram account.

Woweee, i was so excited to hear that the @worldfoodprogramme was awarded the Nobel Peace Prize today. Of course it’s amazing, I do however think it would be even more amazing if we didn’t need any peace prizes because peace was the status quo in our world. But as myself and my colleagues know, this will never be the case in a world without #zerohunger. Conflict and insecurity are the main reason 690 million people in this world go to bed hungry at night and without a doubt hunger is a cause and effect of conflict. If we can make a more peaceful world for future generations then I know that we’ll be able to make sure every single child can live the life they deserve. Thank you so much for all your support and for joining me and my colleagues in doing everything we can to keep food on families’ tables as we work toward a more peaceful and inclusive world 🐶 Foxtrot

As official mascot, Foxtrot has his own ID card, office, and food bowl. Well, he thinks he has an office, but it turns out he does have to share it with humans. Since becoming a fully paid up member of the World Food Program, it has been Foxtrot’s job to bring a smile to those who are suffering, and a quick browse through his Instagram account shows he's up to the task:

Cos even a pandemic can’t stop that smile 🐶 #2020challenge It hasn’t always been easy to muster a smile this year I’ll admit, I miss my colleagues and going on adventures that get me out of my comfort zone. But it’s important to keep finding something to smile about and for me it’s been the little things; making a new friend, being given a treat for doing not much at all, or having a roll in the mud. But of course there are big things for me to smile about too; remembering all the lives we’ve all saved together by staying home or wearing masks during the pandemic, knowing that my colleagues at WFP have been there to provide food support to millions around the world and here in Bangladesh who’s livelihoods are suffering, and knowing that one day this will all be over and I’ll never take my freedom for granted. That last one is a long way off probably but I’m always hopeful of a brighter tomorrow 🐶 Foxtrot

So how does a young rescue dog like Foxtrot help refugees from Rohingya in Bangladesh? Well he explains this on his own blog: ‘You may wonder what a pup like me, with no opposable thumbs and terrible all-round coordination, could possibly do to help in an operation like this.”

“One of the jobs I like the most is making sure no one gets too stressed out. Working in an emergency can take a lot out of a person, but if I see someone looking like they need some stress relief, I run up to them with a toy in my mouth and push my head against their leg.”

He adds: “Humans are simple creatures, and it’s amazing how well this works in relieving tension.”

Foxtrot know about stress himself, as he was rescued as a half-starved puppy from a deserted beach by World Food Program staff before being made into their mascot. With so much pictorial evidence of him guarding food rations and playing with those recovering from malnourishment, there is no doubt that Foxtrot deserves a claim to the prize. Especially as it was clear he needed to help out the head of the World Food Programme, David Beasley, in expressing their joy at being given the prize, whose first reaction to the news was, "Holy mackerel. It's the first time in my life I've been without words."

If there's one thing that Foxtrot's own personal blog and social media presence proves, it's that he's not shy at telling you what he thinks as he helps spread the important messages behind what the World Food Programme wants to achieve. We'll leave him with the last word:

"Thank you so much for all your support and for joining me and my colleagues in doing everything we can to keep food on families' tables as we work toward a more peaceful and inclusive world."