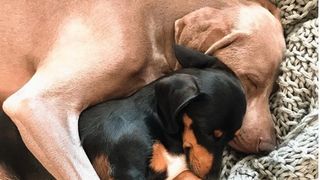 Arnold the Weimaraner was just a puppy when he was attacked by another dog. Already a nervous pup, the frightening experience left him terrified of large dogs and loud barking. His owner, Carolyn, desperately wanted to help him get over the trauma and regain his confidence, so she came up with a plan. Enter Frank.

Carolyn hoped that, at just a fraction of Arnold’s size, Frank the miniature dachshund puppy would be a non-threatening support buddy. The plan couldn’t have worked better; the two became best friends almost instantly.

Anyone else feel like they need just a little more sleep & a cuddle today? 😴 #Monday arnoldandfrank

Since Frank arrived, Carolyn has seen a huge change in Arnold’s confidence – he can now enjoy playtime with other dogs without worrying he’ll get hurt. Frank and Arnold remain inseparable, doing everything together.

Having joined the family a little later than Arnold, Frank looks up to his big buddy in more ways than one – Arnold has shown him the ropes around the home, teaching him all about walks, having his collar put on and barking at strangers.

Carolyn documents the pair’s heart-warming friendship on Instagram (@arnoldandfrank). From trips to the beach in the Australian sunshine to cozy Sunday naps, the two dogs do everything together. With his friend by his side, Arnold is ready for life’s adventures, his scary experience now firmly behind him.