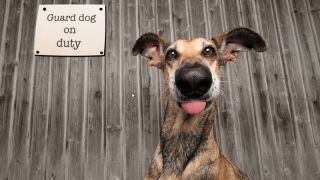 The Mars Petcare Comedy Pet Photo Awards called on all pet and animal lovers to submit hilarious images of their funny furry friends, and the judges have now chosen their favourites to be put forward for the final.

Featuring 40 pictures which range from the ridiculous to the comically sublime, this gallery of finalist photos is a grin-worthy celebration of funny pets and the crazy antics they get up to.

The top prize of $3850, and the honor of being named 2020 Mars Petcare Comedy Pet Photographer of the Year, has meant a hotly fought contest – the finalists have been whittled down from over 2000 entries submitted from over 81 countries in the world.

Now in its second year, the competition was open to all pet owners with either limited or professional photography experience. The competition also has a serious side, as it raises awareness of homeless pets in the UK and raises money for its charity partner, Blue Cross. And what a great way to do it!

Creator of the awards, Tom Sullam said: "The entries this year have been completely and utterly what we needed to raise our spirits in 2020.

“It has been a tough year for many, but these images have not only made us laugh out loud, but also re-affirmed our desire to drastically reduce animal cruelty and pet orphanage.

And if these 40 aren’t enough any you are craving more crazy creature captures, you can see images from the previous year’s competition on the Comedy Pet Photos Award Instagram page, and you can watch out for news of the winner by checking out the Mars Petcare Comedy Pet Awards website.