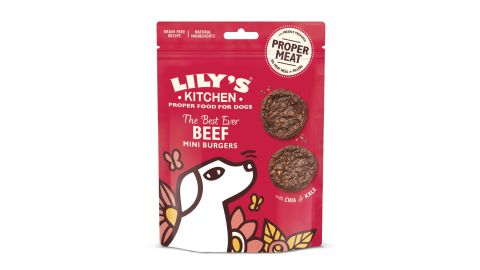 A vet-approved recipe packed with natural and nutritional ingredients makes Lily's Kitchen Dog Treats Mini Beef Burgers a deservedly popular choice, even if they're not the strongest value for money.

Lily's Kitchen Dog Treats Mini Beef Burgers are an all-round healthy dog treat. They’re not tailored to any particular dog or need, but they seem to go down particularly well with dogs who have a sensitive tummy. Lily’s Kitchen says they’re the perfect snack for training, in-between meals or ‘just because’.

The vet-approved recipe contains an impressive 80% beef, with other ingredients including healthy kale and fiber-rich chia seeds, and with no nasty filler or meat meal.

They’re suitable for all pups aged four months and over, and the pouch they come in is described by Lily’s Kitchen as ‘pocket-sized’. It’s perfect for popping in your pocket alongside the poop bags for long dog walks.

They’re so good, we’ve crowned these mini beef burgers as our choice for the best overall dog treat in our round-up of the best dog treats available today.

Each little, round Lily's Kitchen Dog Treats Mini Beef Burgers is made up of 80% freshly prepared beef, which is a good source of protein, iron and zinc. A lack of iron in a dog’s diet can cause poor growth, weakness and diarrhoea, while zinc is important for dogs' immune systems.

Other ingredients include pea protein, kale – which is packed with protein, fibre, vitamins A, C and K and omega-3 fatty acids – and chia seeds, which are also high in omega 3. Omega 3 has been found to reduce the signs of osteoarthritis in dogs, which is a progressive disease that affects up to one in every five dogs.

Each treat is made up of 43% crude protein and 2.5% crude fibres, with 383 calories per 100g – and the recipe is grain-free. Some studies have shown that dogs who eat a low-carb diet (meaning fewer grains, such as wheat, rice, rye and oats) digested nutrients better, however, there are concerns that some totally grain-free diets can be associated with heart disease in dogs, so these will just need to be part of a balanced diet (as with all treats).

Tell your dog they’re oven-baked, too – for better taste, according to Lily’s Kitchen. And the ingredients are sustainably sourced, although that’s more of a bonus for humans, admittedly.

Luckily for dogs, Lily’s Kitchen says they can have up to five of these treats a day. But if you’re unsure, the product page has a handy online guide at the bottom, where you can find out how many treats you should be feeding your dog, according to its age and weight.

These mini burgers are suitable for dogs four months and older, and are available in 70g bags that are resealable for freshness, as well as multipacks of eight.

There are other beef dog treats on the market, of course, but Lily’s Kitchen seems to have an edge. Nature’s Menu beef treats only contain 50% beef, while Webbox Meaty Chomping Chews Beef Dog Treats only have 15% beef. On the other hand, if your dog is sniffing around for something even beefier, Natural Instinct beef jerky contains 100% beef.

These beefy treats seem to go down well with customers – and their many different dog breeds.

One customer says they have to ration them from their springer spaniel, another says they’re ‘a hit with our fussy beagle’. They’re the ‘perfect size’ for one customer’s French bulldog, while another happily points out that they don’t add anything to their chihuahua’s waistline. Beagles and Schnauzers and Belgian Shepherd puppies love them, too, according to reviews.

Someone else notes that the treats are easy to break into smaller pieces to give to dogs as a reward when training them.

The treats appear to go down especially well with dogs who have sensitive tummies. A German Shepherd with digestive issues won’t eat any other treats apart from these, according to one review, while a Pomeranian with a sensitive tummy loves these and other flavors in the Lily’s Kitchen range.

And that’s not the only health concern these mini beef burgers cater to. One dog parent writes: ‘I have an elderly mini poodle cross and she's recently had some teeth removed so I wanted something soft for her. I messaged Lily's kitchen asking for advice and they got back to me straight away. I soak the little burgers in a bit of water for a few minutes and she absolutely loves them.’

However, not every review is glowing. One common complaint is that it’s a shame there aren’t more treats to a bag. One customer writes: ‘The packets contain about 25% dog treats and 75% air. Incredibly wasteful and a disappointing number of treats in each packet.’ Some customers also wish the price was a bit lower.

These mini burgers are an all-round tasty snack for dogs. Lily's Kitchen Dog Treats Mini Beef Burgers may especially be worth giving a go if your dog is a fussy eater, or has a sensitive tummy. You’re not going to get the absolute best value for money with these treats, but you will have a guilt-free conscience knowing that they’re full of healthy ingredients for your dog, from a brand that prioritizes sustainability.

And if you’re training your dog, they’re ideal for stuffing into your pocket and breaking up for smaller treats as a little reward (or bribe).

According to the brand, Lily's Kitchen Dog Treats Mini Beef Burgers are the ‘best ever’, While only a dog can be a true judge of that, it seems these treats go down a storm with most dogs and their owners.